hello friends! Today I am going to tell you about what is Decoder? and its types in this article. So let's start:-

Decoder is such a logic circuit that can identify each combination of signals given on its input. In this, taking n-input lines, there are 2n output lines.

In other words, "a decoder is a circuit that converts a code into a set of signals." It is called decoder because it is the opposite of encoder.

Its types are as follows:-

It has two input lines. Four combinations of input signals can be made from two lines – 00, 01, 10, and 11. For each of these combinations, one of the 4 output lines is HIGH and the rest of the lines are LOW.
For example:- If the input is 112, then the output line '3' is at logic '1' and the rest of the lines are at logic '0'. This action is called decoding. 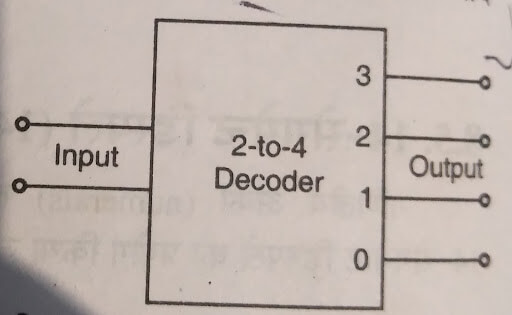 In the above picture you have been given the symbol of 2 to 4 decoder. It is also called 1 out of 4 decoder. Because in this only one line out of four output lines is on HIGH.

It has 4 input lines and 16 output lines. Its logic circuit is shown in the above figure. In which there are 4 control input (A, B, C, D) and 16 output lines.

No data input is given to this decoder, rather it is given input only in the form of control bits (ABCD). In this decoder, for any one combination of input, out of 16 output lines, one line is on 'HIGH' and the rest of the lines are on 'LOW'. That's why this decoder is also called 1 of 16 decoder.

BCD to Decimal decoder has 4 input lines and 10 output lines. It is also called 1 of 10 decoder because out of its 10 output lines only 1 is on 'HIGH'. And the rest of the lines are on 'LOW'.

7 segment LED display is widely used in digital systems. But to use it, BCD data needs to be changed. Therefore, BCD to 7 segment decoder is used to convert this data.

In this, the output of the decoder can be either active LOW or active HIGH. 7 segment display can also be common cathode or common anode.